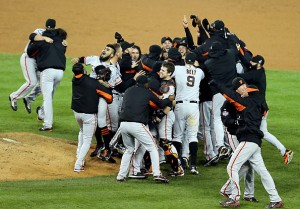 Well it has happened again, baseball season is over. Congratulations to the San Fransisco Giants for sweeping the Detroit Tigers to win the World Series. I thought I would be rooting for the Tigers with the best pitcher in baseball (Justin Verlander) and the first Triple Crown winner in 45 years (Miguel Cabrera). But as I followed the Giants through the playoffs having to come back from down 0-2 games in the NLDS and back from down 1-3 games in the NLCS I really started to admire their grit. The Giants were full of "come back kids" from Former Cy Young winner Barry Zito who was left off their 2010 World Series roster to Pablo Sandoval a.k.a. "the Panda" (World Series MVP) who was benched during the 2010 World Series to Tim Lincecum their former two time Cy Young winner willing to come in from the bull pen. This team was full of characters and never say die competitors.

I am a huge football fan, but there is nothing like the game of baseball, at any level. With all the intricacies, nuances and all the games inside the game, baseball is supremely entertaining. I grew up listening to the great Vin Scully calling Dodger games on the radio "back in the day" and learned so much from his rich descriptions of the games and the players. After moving to Vermont I began listening to Joe Castiglione calling red Sox games and have continued to enjoy all that the game has to offer.

They say that NFL football is by far and away the most popular sport in America today especially among young males. Maybe because it appears to be more fast paced as compared to baseball in this instant gratification sound byte world we live in. Maybe because one has to be a little more of a student of the game to truly appreciate it. I don't know, what I do know is I can't wait for the inevitable news as winter melts away and the renewal of spring arrives that the pitchers and catchers are reporting to spring training camp again and all will be right with the world once again.